The club was founded in 1893 with the Heath course originally designed by Davie Grant, the famous North Berwick professional.  The course was modified in the late 1920's by James Braid and has remained true to its layout ever since.

The formation of Woodbridge Golf Club was entirely due to the late Major J E W Howey, who some years previously purchased the Grange at Melton. He was a fine shot with a gun and rifle, a great fisherman and horseman, and an all-round sportsman, but at that time he had never played golf, a game which he held in great contempt. However, once that he had been induced to play golf, he declared it to be 'A damned good game'.

There was no doubt about it, he had contracted golf fever and he forthwith proceeded to lay out six holes on the park in front of his house. This was just a start as he was convinced that we had in the neighbourhood the material for a first class golf course and on his own initiative and at his own expense he brought down from Scotland a famous old golf professional named Davie Grant to spy out the land. Together they wandered over all the likely ground beyond the Deben and finally selected the heathland on the Sink Farm on Bromeswell where the present golf course is located.

A few prospective golfers decided that a club should be formed and elected a provisional committee. They thought that about one hundred acres would suffice and approached the tenants of the farm. Here was the promise of a bright future and so entered into possession, engaged a groundsman, hired a room in the Cherry Tree Inn as the Clubhouse and proceeded to play golf.

In 1930 a golf writer describes Woodbridge as a golfer's paradise and admires the wiry heathland turf and fine panoramic view of the surrounding country from the 10th (now the 9th) tee. How different today!

Of course, things are always bound to change and in the last forty years scrub oak and silver birch have tended to change gorse and open, heather-lined fairways to closed-in tree-lined fairways.

In 1908 a Mr Fryer redesigned the course and the 17th hole began on the present tee, but instead of dog-legging right, continued straight over the Melton to Bawdsey road, then an un-metalled track through a cutting, to a green on the far side. The 18th was a short hole back towards the clubhouse and the (present) 17th green beside it. In 1910 Mr Fryer added a footbridge (shown in the photograph below) at the cost of £50. 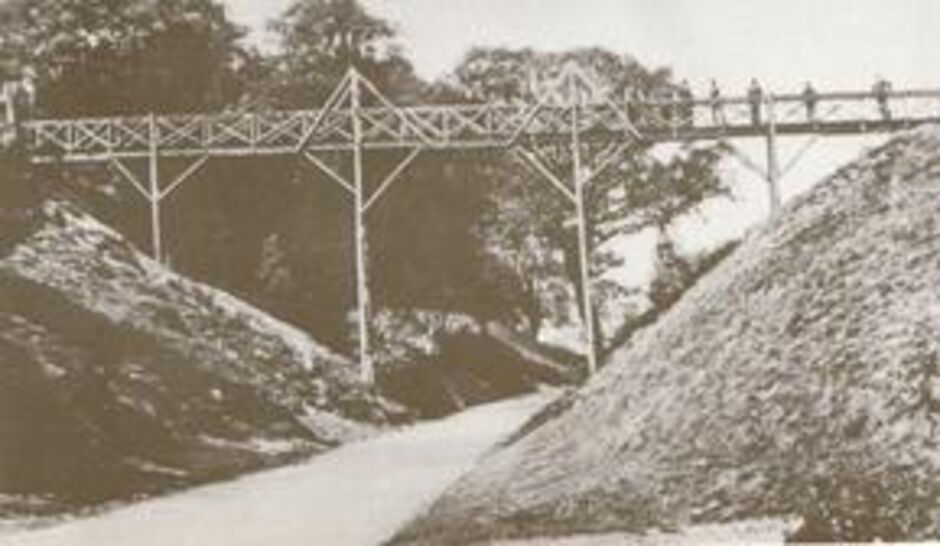 Some twenty years later, on the advice of James Braid, no doubt in part because of the increasing use of the Sutton road by motor vehicles, the 17th was restored to its present form to become the 18th a fine finishing hole in every respect. As a result the short 18th across the road and Fryer's footbridge both had to go. A new short hole was brought in (the present 12th), for which credit is attributed to D G Bett, the Secretary, for the concept and James Braid who carried out the design.

Over the years the biggest disruption to play on Bromeswell Heath was the Second World War. With invasion appearing imminent, a new hazard appeared on the course. Scaffolding poles and wrecked cars were strewn over the flatter areas, not to frustrate golfers (which it did) but to destroy enemy gliders or parachutists attempting a landing. No records or photographs have come to light. 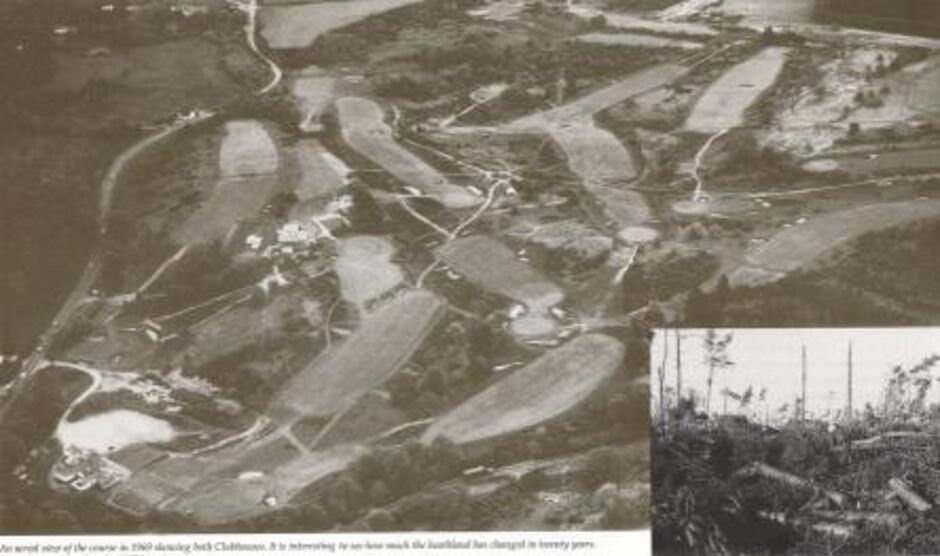 This photograph shows an aerial view of the course taken in 1969. The inset shows the devastation caused by the 1986 hurricane. Although devastating to the surrounding area this paved the way for the club to purchase additional land from the Forestry Commission enabling the 9 hole Forest course to be added.